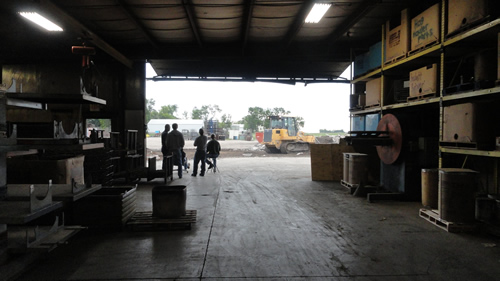 Haala Industries, Inc. continues to grow despite our country’s economic recession. Earlier this summer Haala Industries began to expand their yard to better product inventory organization prior to starting the new addition on their facility. The new location for the yard is just north of Haala Industries’ manufacturing facility.

Haala Industries, Inc. will be expanding to the east portion of their existing facility. The new addition will accommodate current and future growth of existing and new product lines. Currently they supply the precast industry with reinforcement products such as rebar mats and wire cone cages, and finished accessories including grates and guards.

This is an exciting opportunity for Haala Industries as it will relieve congestion throughout the facility, streamlines processes within the shop and allow the production floor to become more efficient. It will also create room for future automation to be incorporated.

The yard expansion is now complete and is being utilized. The construction of the new addition is scheduled to begin in early July with a complete date of late summer or early fall.

Steve Haala feels, “With our economy still turning around from a recession we have found many doors to open. We have continued to grow, hired more employees and purchased new equipment over the past few years. As the company continues to grow, we are expanding our manufacturing area by nearly fifty percent. It is puzzling to see so much opportunity all day long; however when you turn on the evening news a different economic outcome about our country is being broadcasted.”

Haala Industries, Inc. had an exciting opportunity to work with the "Today in America" crew to create a segment featuring the company as an American manufacturer.

Haala Industries, Inc. was first approached for this unique opportunity with the "Today in America" in July 2010. "Today in America", hosted by Terry Bradshaw, features a variety of topics and relevant issues that impacts America.

The filming took place in June of 2011 on site at Haala Industries, Inc.. The segment captures Haala Industries' mission, core values and innovation as they grow and expand as a company.